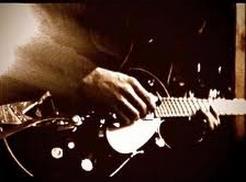 “I can hear music in the stars/I can paint pictures with my voice,” claims singer/ songwriter Kurt Baumann in “Music in the Stars,” one of the songs on The Burned, the name of his solo debut project, the result of a lifetime chasing his muse.

Born in San Antonio, and growing up in a rural East Texas town, his parents separating when he was three, Kurt and his sister lived their teen years with their father, an airline pilot who once worked for the Prime Minister of Lebanon, in such exotic locales as Saudi Arabia and Germany. As a child, his favorite singer was Willie Nelson, but he also listened to master storytellers like Johnny Cash and Kris Kristofferson before his sister turned him on to rock & roll, eventually drawing him to visionaries such as John Lennon, Jim Morrison and David Bowie. Although he played in a grunge-style punk garage band while in Germany, then was a member of the popular jam band Kan’nal, he traveled a long road to write his solo bow that took him to a mystical, transcendent experience in an abandoned mining town tucked away among the mountains of Mexico where he wrote much of the album.

“People have described my music as kind of spooky and dark,” says Baumann, much of its inspiration coming from the parched terrain of his home state that has produced a musical melting pot of country, blues, soul, rock, R&B and psychedelic sounds. “I needed to fulfill this vision by going back to my Texas roots.”

That background can be heard in songs like the sun-baked “Where Are We Now,” with its jangling guitars, whispered vocals and a cappella choir; the distorted rock guitars of “Monster;” the loping, atmospheric “What We Know;” the sensual blues of “Hard Lesson;” the ominous, Pink Floyd acid strains of the sci-fi “Man Running;” and the soaring chamber string sextet which climaxes “Make Believe” as Kurt urges us to “remember what it’s like to play God” and “make believe in miracles again.”

“I’ve always dipped into elements of the subconscious as a writer,” he says, calling Carl Jung one of his favorite authors. “Some of the sounds I choose trigger those feelings of something underneath the surface, hidden from view. It started out as an acoustic record, like Ray LaMontagne or Damien Rice, but then I began working with synthesizers, plug-ins and electric guitars during the recordings and the songs began to organically evolve with these electronic and atmospheric elements.

A vocalist from the time he could walk, Kurt would sing country songs for his elementary school show-and-tell, always knowing he had a stage presence, but it wasn’t until he gave up music, traveled to Mexico, and had a number of explorative journeys and experiences that he found he had something to write about.

“I wanted to find a deeper thing within myself to present to the world,” he says.

Biblical references dot songs like “Where Are We Now,” “What We Know” and “That’s Life,” which express that existential journey, while “Hard Lesson,” “Listen” and “More Than I Want” deal with relationships and the more emotional side of that path. The acoustic “Time” even features a duet with his partner, singer/songwriter Katie Gray. Throughout, Baumann is like a shaman, providing spiritual signposts for listeners in his musical visions.

“I’m not trying to preach, but rather share my views with others,” he says. “I’m fascinated with the desert visions of Native Americans, the whole make-up of that subconscious realm. It’s like those ceremonies that are thousands of years old and tap into the underlying grid of what’s real. I’m trying to put that mystery and magic into the music without having people judge it. Mainly, I want it to be good music to listen to, but to also trigger something a little deeper inside.”

There’s an apocalyptic, end-of-days feel to music on The Burned, but Baumann insists he’s a glass-half-full kind of guy, leaving the choice up to us.

“It’s not like I feel I can change the world, but I really want to put stuff out there that can help people, make them feel better,” says Kurt. “Give them the seeds they can plant and grow something beautiful with. I want people to discover things within themselves through the music.”

On “Listen,” he combines Chris Isaak’s twangy noir classic “Wicked Game,” offering the advice, “Hang on to your dreams/Cuz dreams keep things alive.” On the majestic “That’s Life,” he reveals, “I’ve been chasing a reason/For my life,” with the same confessional gospel fervor of U2’s “I Still Haven’t Found What I’m Looking For.”

“In the past, I struggled so hard not to reveal my influences, but this time, I really wanted to let them shine,” he says. “I found out that’s not necessarily a bad thing.”

“I definitely feel this album captures the essence of what I’ve been through and where I am right now,” he insists. “Obviously, I’m constantly changing, and I will try to do my best to continue getting better, but for the first time, I really enjoy something I recorded.”

Now, returning to his current hometown of Austin, Kurt has set about forming a band to play these songs live. In addition to The Burned, he has also toured and recorded with Grammy-winning DJ Adam Freeland’s electro-rock trio Freeland, is co-producing Katie Gray’s new album and joining her in a duet project called The SeaStars.

“The record business may be vanishing, but the music business will always be here,” he says. “The demand for something new and good is larger than ever.”

“Until this album was made, I had never really achieved what I wanted in the studio. I created all these songs in my home studio, then Dik and I were able to cast its recording like a movie, bringing in the players and showing them the parts. We were finally able to get the sounds out that were in my head this time. The vibe and the vision were clear to me.”

“They tell me nothing lasts forever/But let me tell you to your face/You’re never gonna catch me/We’ve got to keep running.”

With The Burned, Kurt Baumann’s music carries us to a world where there are no finish lines and always something greater beyond, “…just jump over the edge and see.”